NEWS > Why you should be taking part

Why you should be taking part 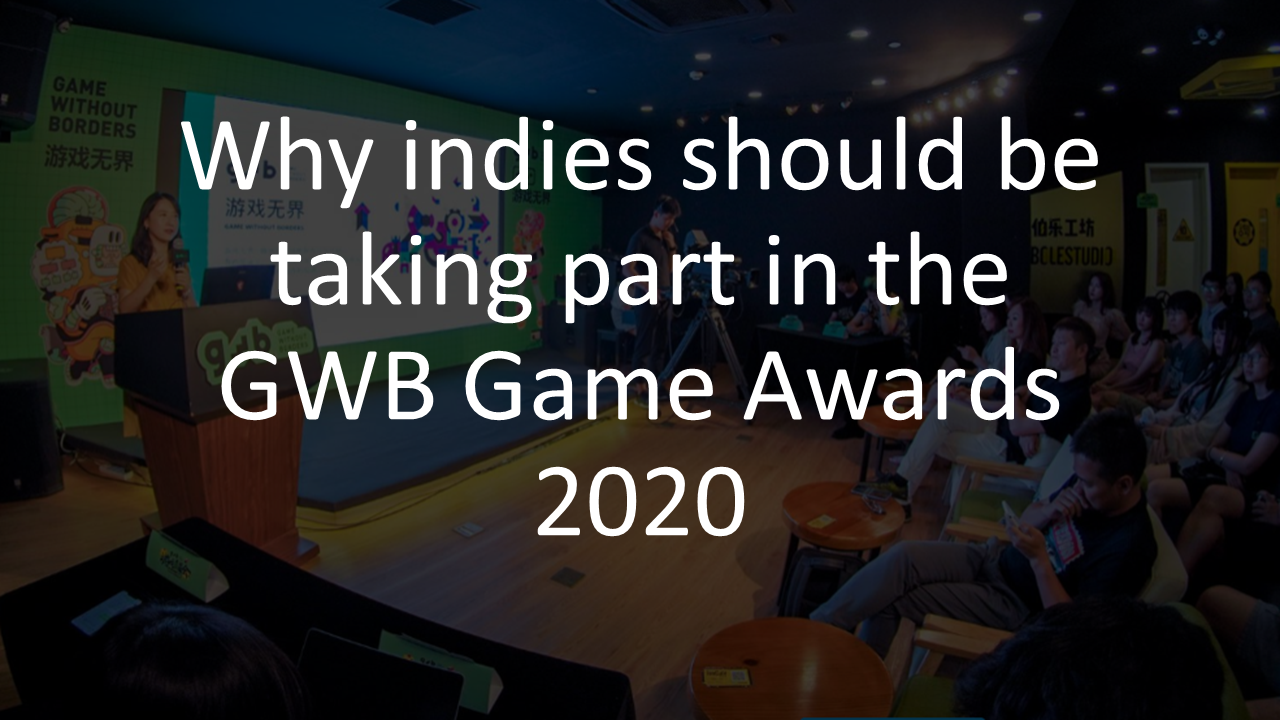 Last week we announced that the 2020 GWB Game Awards were open for submissions. The reaction and feedback have been fantastic so far and we have already seen some great games come in, some of which we will be highlighting soon. If you have not yet had a chance to read that original announcement, check it out here. There you will find some information about what we’re offering and who we are partnered with.

Today we thought we would talk more about why, if you are an indie dev or publisher, you should consider getting in contact and getting involved. Some of these reasons may seem obvious at first, but we hope to also cover areas you may not have considered. We will follow this up in the coming weeks with some entrant spotlights and more information about the GameDev Boost program.

We need to accept that just about any and every awards competition will dangle the hook of “promotion” and “exposure”, but how much is that actually worth? While it is great to have a certificate, trophy and/or logo that you can stick on social media or your store page, how much does that translate to extra sales and attention? Do retweets really convert into more followers? For some devs, the time and effort needed to participate in an award is not worth the promotion in return, or the return is hard to quantify, especially outside of the big events.

Thankfully, everyone involved in running and supporting the GWB Awards knows that. Our partners at Intel GameDev Boost said just as much in their recent Boost Update post. So, does this mean that promotion is useless? No, it just means we need to make sure to do it well, make sure to cover all the bases, and that it cannot be the only thing on offer.

One of the ways promotional opportunities in the GWB awards differ from others, is that this exposure is truly global. The social network reach of Intel extends beyond a million people, and their newsletter reach is even greater. This is incredible and a real boon, and helps bring games into markets all over the world, from the USA to India. Then, when you then combine that with the reach we can offer in China, things get even better.

Support from Tencent GWB helps teams cross barriers that can seem insurmountable. We work hard to help indie games from all over the world come to the attention of a Chinese audience and the reaction has frequently been positive – we have seen games come to the Chinese market after success at the GWB awards, we have seen games win further prizes in China, and we have seen games gain an increase in the number of wishlists and sales from Chinese-language users on international platforms. None of this is to be sniffed at, especially for indie devs.

This, at the very least, should hopefully convince some teams that this is more than just your average promotional opportunity. It is worth noting that, while a lot of publishers and partners are great at marketing and promotion internationally, gaining visibility in China is not something that many are able to do.

We also, where possible, coordinate with the teams, publishers, partners and regional associations to make sure promotional materials can land as effectively as possible. That takes time to get right, but it is worth it.

Since the end of the 2019 awards we have put out some articles on winning games, in English and Chinese, consisting of anything from the judges' thoughts, to an interview with the dev team behind a certain game. Content can be original material produced by GWB, or it can be material produced by the development team themselves – what matters here is that it is content that will appeal to a domestic audience. 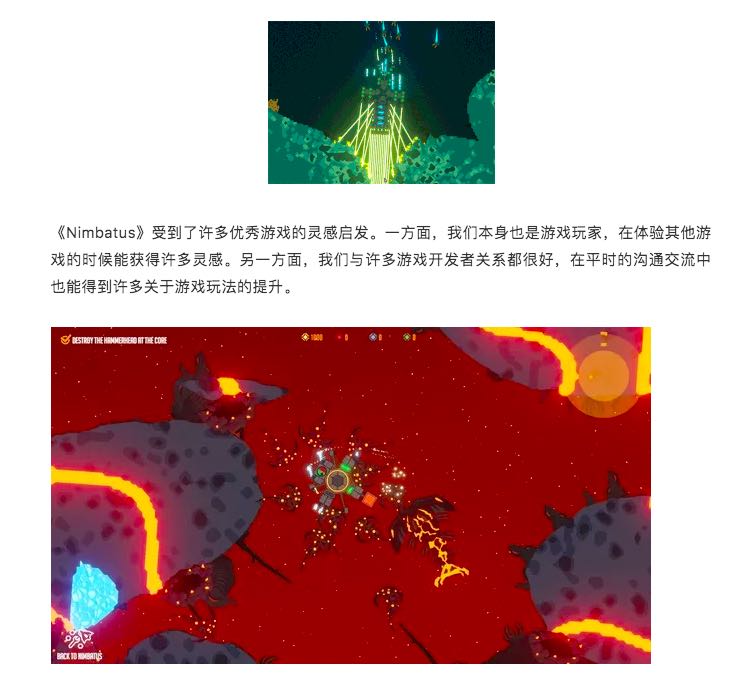 It has been several months now, and we are still doing that. When putting together our plan for post-awards support, we tried to think about the needs of these teams. For example, in 2019 we received a request to move content for a game forward in the schedule in order to coincide with the release date. We were happy to do that, as we want the best for participating teams.

For other teams, post-awards support has meant putting them in contact with groups interested in bringing their games to market or offering services from the Tencent GWB Support Plan. We try to make sure that our efforts have a long tail and that efforts exist for the weeks and months before and after the winners are announced. And, by sitting down and running post-mortems when activities are finished, we can identify ways to improve any areas that we feel we could do better or find partners to help us cover those bases.

We mentioned promotion before the awards, and that is true. Over the coming months, during the submission period we will be working with our partners at Intel to highlight some entries. (Note: The entries we highlight will NOT be picked by the judges, so do not worry that this implies anything about any eventual winners!)

We are doing these highlights for a few reasons:

1. Some games will come out in the period between the awards starting and concluding, and they could really use an extra bit of help now.

2. It means teams can receive promotional help from Tencent GWB and Intel even if they do not make the shortlist.

3. By highlighting some highly anticipated upcoming indies alongside some, perhaps, lesser known ones, we can drive players to check out games that might have flown under their radar.

One of the first things we decided when planning the 2020 awards was that, because promotion can be hard to define in terms of actual results, we needed guaranteed prizes for teams to add to the pool.

When thinking about these prizes, we also wanted to incorporate some basic principles, namely:

1. The prize has to be something that will make dev lives easier

2. There should not be a cost to collect

3. Prizes should apply to as many categories as possible, not just the top game.

Besides promotion, we can generally break prizes down into a few areas - cash, hardware and services. While the cash prize is only available for the Gold winning team, all teams will receive hardware. Furthermore, prizes in partner categories will be tailored to the needs of those teams - when we talk more about what Tencent Cloud are offering, for example, we are sure multiplayer teams will see a prize tailored specifically to them.

We already mentioned that as part of our partnership the GameDev Boost team are helping us promote and highlight standout teams and winners. But, GameDev Boost is much more than just promotion.

We are going to have a longer article going up soon talking about GameDev Boost because we want to make sure that participating teams know that the Boost program, and the GameDev program in general, is more than just using social media channels. The value they can offer to game developers is broad, varied and comprehensive, consisting of not just social media marketing, but also event support, sales opportunities and go-to-market support.

On the domestic side, beyond our own channels, we are lucky to be able to work with a wide selection of industry, streaming and media partners.

Opportunities are broad, and available to all

Game tastes vary from market from market. There is, perhaps, a line of thinking that suggests that the “best” indie games are 2D pixel art adventures, or introspective “walking simulators”. There is nothing wrong with these, but it can lead to a perception among some devs that fun multiplayer party games, or mobile phone puzzlers, are likely to get overlooked when it comes to award recognition outside of Casual and Multiplayer categories, much in the same way that comedies, animations and non-English language movies are often ignored for Best Picture nominations when the Oscar shortlists are being decided, with a few notable exceptions.

Of the 7 winning teams last year, 4 of them had multiplayer components. There were puzzle games and Battle Royales. The only thing we are looking for is games with something unique.

We cannot stress this enough. If you are worried that your game is not “awards material” and will not get a fair shake, try the GWB Awards. We love games of all types, and we want to help them succeed.

When picking judges for the GWB Game Awards 2020, we tried to select a group of people that could cover multiple parts of the industry, from tech, to services, to events and media. They have decades of experience, are passionate supporters of the games industry and the developers within.

But, beyond just having experienced, passionate eyes taking a look at your game, this is also an opportunity for developers. We will be trying to get some feedback about the judges’ selections, and their feelings about each game we put forward to them, to be used when we do post-awards wrap-ups on these games. Beyond this, having your game in front of these judges opens up further opportunities for you and your team.

Event attendance can be expensive – there are travel costs, hotels, food, not to mention the cost of entry, setting up a booth…it can add up. Thankfully, there are industry groups all around the world who can help shoulder some of this burden, in order to help local indie devs reach a wider audience. And, of course, many industry events have competitions in the indie space, designed to highlight the best of the best.

For many devs, though, there is a cost-benefit analysis to be had when considering which events to attend. Would I be better off spending the money we would use attending this event on targeted Reddit ads? Will event attendees who visit our booth actually wishlist our games in high enough numbers to justify this outlay? Is this event going to help me reach my target audience? Like many things in life, the very clear answer is…it depends.

We aim to take much of that worry away with the GWB awards. They are online, they are judged remotely and so no travel is needed and there is no financial outlay beyond the cost of the time taken to submit. That means that once teams submit, they can just keep an eye out for any messages about promotion until the shortlist is announced.

We are working hard to bring as many teams as possible into this competition. Our intention is to creative an accessible, positive and dev-focused awards program that has lasting positive effects for the participants.

If you have not signed up yet, and want to give it a try, go here.

Next up, we will put a spotlight on some of the entrants thus far, tell you more about GameDev Boost, and also talk in-depth about one of our 2019 winners.